(This is the only article where I am going to write in the first person and that is because of the personal tragedy that our family experienced from the loss of a childhood friend to drugs and I want to convey how tenuous and shocking teen drug abuse and addiction changes people’s lives forever and how badly we need effect teen drug rehab.) 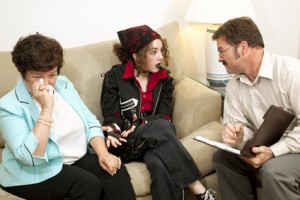 “She’s the one that needs treatment, not me!”

Everyone that has reared children has feared the late night phone call where there has been an accident or in our case, a call from a mother who lived next door and whose son was an honor student and best friends with my son, and who knew the dangers of drugs, but I still received Sharon’s call telling me that Kenneth had shot himself. He had broken into his father’s gun cabinet and shot himself after taking LSD and feeling the he was being overtaken by his frightening thoughts. Nothing could have impacted our family and his other peers more than this unthinkable tragedy, but it wasn’t the loss of a dear friend that kept my son off of drugs, it was more about his ability to reason better than most at his young age and to not be influenced by peer pressure to an extent that would force him over that line of better judgment. I consider my fatherhood as being very lucky because I have seen fathers that appear to be better equipped at being able to devote more time and love to their children, lose this battle to keep their youth off of drugs. I have seen families, besides our neighbor’s, who have had their stable lives destroyed by adolescent substance abuse and addiction.

As a rehab professional and leader in the alcohol and drug field for many years, I can tell you that this evolving field is hard to reckon with in many ways and for many reasons, but the lack of effective substance abuse prevention and teen drug rehab is unconscionable.

If you have been reading this site you would have seen other areas where I have little forgiveness for the lack of success coming from many of the therapies that are designed and tested on alcoholics and addicts because of a therapist’s attachment to a particular modality of drug treatment that is connected to one’s ego and not because of the therapy routinely rehabilitates sick, addicted individuals without exceptions, justifications or excuses. eg. and example of an overused justification in the alcohol and drug rehab field is the reliance on the “disease model”. I have heard many Clinical Directors explain away their responsibility by stating the this or that patient’s disease is so bad that it may kill them and there is little we can do… Horse feathers!

It is particularly angering when this type of non-scientific and unprofessional thought affects our children, and it does! The DARE program has been critiqued for overly stimulating the excitement factor in teen drug use, and whatever it was doing, it doesn’t have the stats to justify the money spent on that modality of drug education and prevention, which takes away from having the funds to promote effective teen drug rehab centers.

One of the most successful ways to help teens with substance abuse issues is to do effective alcohol and drug prevention follow by effective teen drug rehab as needed.  Teenagers are very impulsive and easily influenced.  They can be totally convinced that they are going to follow the crowd that is using pot and other drugs, but when they succeed or are accepted at a more pro-social activity, they can quickly join the other group.  They will stay in these positive groups as long as they are getting their personal social developmental needs met.  Teenagers are a wonderful expression of the human experience and we need to not take them so seriously that they feel that they can’t change and be fluid in their lives.

We all know that it is a vulnerable time in one’s life.  Almost no one will say that they would like to return to the eighth grade, but now that you are older and have an understanding of that stressful time in life, it is important that you show support and understanding for those that are going through the stress of adolescence.  They are quite vulnerable to drug abuse since drugs make you go exterior to the anxieties of your life and empower you to feel the way that you are longing to be.

When it comes to teen drug rehab, we have also failed to create programs based on solid principals that produce drug-free -lives at the 75% success level with those 18 and above, but there isn’t one of these modalities of treatment programs licensed for adolescents.

So, where does that leave the reader who, more than likely, found this site in the hopes of finding something that can help situation with a child or adolescent.

It lets you know that you need to be more cautious than you might think in terms of accepting authorities advice on what is best for you son or daughter. There are some very good, dedicated therapist that specialize on teen substance abuse, but there are many more that don’t get the desired result. Please call and ask for our advice when seeking professional help for your teen. 888-781-7060.